It appears in 1179 among the possessions of the abbey of Saint-Chaffre du Monastier confirmed by a bull of Pope Alexander III. Like most of our Romanesque churches, it has evolved over the centuries, including the addition of several side chapels and the construction of a rudimentary bell tower in the sixteenth or seventeenth century bell tower which was replaced in 1940 by the crenellated tower that we see today.

Note first the Romanesque portal open to the south, very simple, without tympanum, with its large arches, two of which rest on small columns and a key bearing an inscription “IIII”.
Inside, we will first discover the typical Romanesque nave with its two arched vaulted spans reinforced by doubleaux resting on simple consoles. In the bottom of the nave, at the top on the west side, there is a small opening and on the paved floor a beautiful circular sandstone stoup and a beautiful twelve-sided black stone baptismal basin.

On either side of the second bay of the nave, two chapels open, the arches of which are reinforced by powerful ribs and rest on double arches and formets. The end walls are pierced with arched windows and niches are home to four restored statues.
The nave ends with a choir framed by two other chapels, all also vaulted edges, in the same style as the previous chapels. These two chapels date from 1593 for that of the south and 1841 for that of the north.
A major interior renovation project has been completed since 2007. It is planned to continue with a restoration of the bell tower which will give it the comb shape it had before 1940. A subscription was opened to help finance this operation.

The attachment of the inhabitants to this small monument that has been hosting for 10 centuries the joyous or difficult moments of the life of the community is real. This is why the municipality is working beyond the religious aspect to make it a meeting place of quality (exhibitions, concerts …). 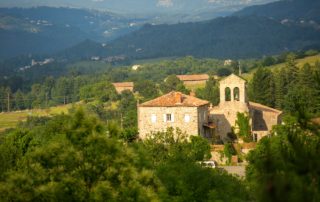 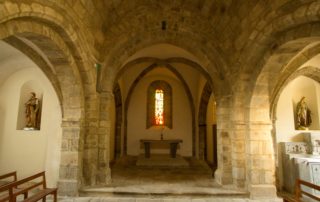 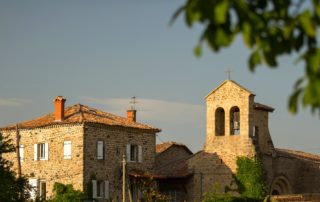