The current church of Jaujac was built in 1848-1852. It has basket-handle vaults, paintings in the choir, three gilded wooden statues and an organ with 23 instruments installed in 1970. There are many concerts in this church.

The church of Fabras was until then a sleeping beauty. It had abandoned itself over the centuries, hidden under layers of plaster and plaster. Some works, carried out from 1949 to 1985, to protect and “clean” both inside and outside, have inadvertently masked its heritage interest.

Primarily, the solid building, dedicated to Saint-Pierre-aux-Liens and whose foundations date back to the twelfth century had only one nave with a barrel vault. In the sixteenth century, the monks of Charay add a wing that houses three chapels: (starting from the choir :) Our lady of piety, St. Trinity, founded in 1631 by the Chanaleilhes, lords of the Castle of Pin (Some of them would sleep under the slabs of the church), and the third dedicated to St. John the Baptist.

In the heart, the keystones with ogive crosses, with its Gothic arches, are supported by capped lamps with human heads. The porch arch in Romanesque arch (classified) is supported by two sculptures that have been hammered. An architecture with harmonious simplicity that generates excellent acoustics. The place is conducive to meditation and singing (there are sometimes concerts).

The five-arched bell-tower, typical of the churches of the Cévennes Ardéchoises, houses a bell dating back more than four centuries which deserves to be classified: it dates from 1656, has a diameter of 770 mm and weighs about 275 kg. It bears engraved in bronze, an inscription in Latin “Of the lightning and the storm deliver us Lord. St. Peter pray for us. The bell had been silent for years. Its mechanism was repaired in 2010: it skews the hours again but its defective mechanism no longer allows to ring the Angelus.

When the municipality of Fabras decided in 2013, to rebuild a roof that was in poor condition, the question of a global restoration arises: surveys done on the facade reveal, under layers of plaster, an apparatus of solid sandstone stones . The more the stones have been stripped, the more the evidence has imposed itself … It was necessary to wake up the sleeping beauty, to give it life again.

Other polls were carried out inside the church: under the interior plaster appear frescoes of the eighteenth and nineteenth centuries (reminiscent of those of the church of Nieigles): floral motifs, cross of St. Andrew, including. The culs-de-lampe, which support the vaulted rib vaults, were drowned beneath the coatings: they suddenly reveal beautiful little heads finely painted; at the veins of the arches, the cut stone reappears …

The town has therefore set up an ambitious restoration plan with the help of Armand Guérin, a heritage engineer, thanks in particular to subsidies and the setting up of an always open subscription.

Several slices are planned:
– Outdoor catering,
– Repair of his bell, see setting up a carillon of 5 bells,
– Inner restoration.

The first step, with the discovery of the stones and the lime rendering of the exterior walls (church and former presbytery), is almost entirely finalized. Next step, the bell!

An association has just been created to encourage and support the renovation of the church of Fabras, promote the heritage and make it known as well as organize cultural events: Stones and Links.

And who knows, in a few years, it will be perhaps in the circuit of the Romanesque churches of the department. 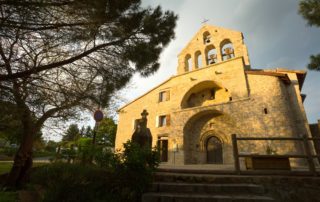 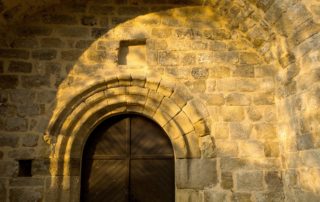 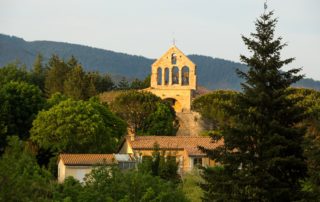 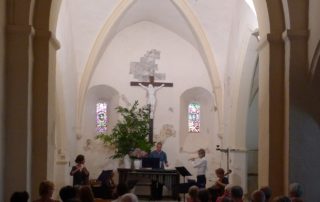