In the land of young volcanoes in the heart of the Monts d’Ardèche regional natural park, Fabras is a small village with Cévenol charm.
Listen to the whisper of the river, hold by the basaltic flows, it is a small corner where it is good to live. Fabras: an island?

Environment
Fabras, a small Cevenol village perched between the valley of Ardèche and Lignon, is 450 meters above sea level. It houses 283 fabrassous and fabrassounes. While strolling in the village, according to the calades, you will discover charming stone houses entirely restored which gives it a particular character.

History
Fabras already existed 1000 years ago. During the wars of religion Protestants and Catholics seem to coexist peacefully. In the 17th century, the Fabrassous are almost all peasants. Famines, floods, droughts, the Age of Enlightenment is not more lenient for Fabras.
It is in the nineteenth century that the Fabrassous create their public school. A little later, the war breaks out and the cultivation of the chestnut decreases: we are in the twentieth century. Today Fabras is looking for a bright future. The village is repopulating and the heart of Fabras still beats very hard.

Patrimony
Château du Pin: Visitors do not enter a museum but in an inhabited house. They first see how a site gives birth to an architecture, the life of a small castle typical of the Cévenne ardéchoise through the evocation of its inhabitants over the centuries: lords, peasants, then a woman painter: Colette Bonzo. All marked this place with their imprint. It hosts all year round many exhibitions and creative workshop, it is often defined as a place of living art. It also houses a garden labeled garden remarkable.
Church of the twelfth century: It has suffered greatly over the centuries, including risky restorations and excess coatings. It is even said that it has been restored to the Mexican style. Yet she keeps her charm. At its creation the church had only one nave. The monks of Charay have added a side wing which houses three chapels. One of these chapels was founded by the Chanaleilles, lords of the Château du Pin. Some of them would sleep under the slabs of the church. In the choir, the cross vaults are supported by crows with human heads. The place is conducive to meditation and singing.
To see: The porch in Roman arch, which is classified.
Echelette Bridge: It spans the Lignon. It has the distinction of being sloping to adapt to the relief.
The village is labeled 1 flower for villages flowers.

Votive festival with regional meals organized by the CCAS, the first weekend of August.
“Les Estivales” at the Château du Pin, July-August, combine contemporary art, live performance (theater, performances, setting of text space), video and concerts. Creators and performers are invited to participate in these events. The accent is put each summer on one or more creations associating theater, music or visual arts.
Health trail, Swimming on the banks of the Lignon, Hiking and mountain biking trails, Fishing, Petanque

Sightseeing
Belvédère de Fabras, in Les Plots, admires the most beautiful basaltic flow in Europe.
Nearby: picnic area and activity area for children.
From uranium to Fabras: during the summer of 1956 a team of geologists discovered traces of uranium in the form of yellow-green sequins of autunite, in the district of Soulhet. But the exploitation did not follow. Fortunately, perhaps for the beauty of the sites, for the environment of the village and the health of the inhabitants. Data from the book “Walk around the Ste Marguerite mountain” small historical and tourist guide of the Cévenne Vivaroise by Lucien Avenas & Collaborateurs, 1989. 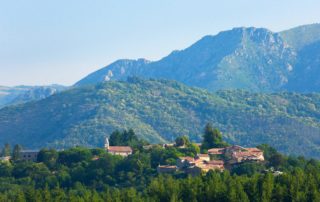 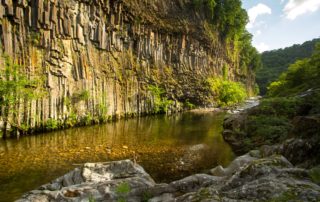 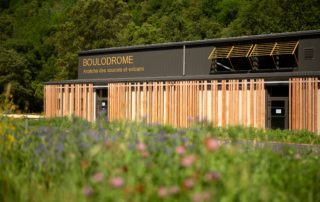 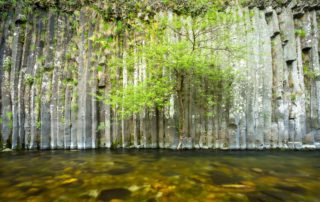