St Pierre de Colombier has developed along the river Bourges, upstream from its confluence with the Fontaulière. In the surroundings, one can count a dozen hamlets.

Environment
St-Pierre-de-Colombier is located in the Bourges valley upstream from its confluence with Fontaulière.

History
This modest municipality of the canton of Burzet, knew its demographic apogee at the 19th century thanks to the industry of the milling. Up to seven factories of various sizes were then scattered along the Bourges bringing, not wealth, but some advantageous complementarity to a peasantry dependent on the ingratitude of a hilly and poor soil. The departmental road D26, which goes up the valley of Bourges, crosses the village between Meyras and Burzet, and allows an easy access to the city of Aubenas, capital of the south-Ardèche, located at 22 km.
The town consisted, until the industrial boom, of a modest chief town and many heavily populated hamlets (to name only the most important: Le Ranc, Le Pouget, The Prat, Celas, Collanges, Pruneyrolle, Arzalier, Hauteysac, Le Roux, Pisseloup …). To get closer to factories, the village has grown along the river, to the detriment of hamlets perched in the blanks of the surrounding mountains.
St-Pierre-de-Colombier is the emanation of a very old parish (Sanctus Petrus de Colomberrio) belonging to the abbey of Charay * since the 12th century and until the Revolution. (she is quoted in the “charta vetus” on the occasion of the donation of her church to the abbey of Charay in 1179 by the bishop of Viviers). The Romanesque church, dedicated to St. Peter, was destroyed around 1860 by the priest Doize and replaced, in the same place, by the current church, larger and clearer, better adapted to the population explosion of the time. The cure (former priory) dates from the 17th century.
In feudal times, the powerful and rich ‘de Montlaur’, barons of Aubenas, Montpezat and other places, were the overlords of St-Pierre-de-Colombier, later replaced by ‘La Tour des Bains’ and ‘de Chanaleilles’, but none lived there. In the absence of a castle, one can nevertheless mention the fortified house of Aulueyres, property of the Montlaurs and strategic place at the confluence of Bourges and Fontaulière. A tower (destroyed in the 19th century) defended the access of the valley and allowed a toll for the benefit of the lord; the rye, oil and hemp mills that existed here in the 14th century have gradually given way to the silk industry. Under the leadership of Françoise de Mathy, owner of Aulueyres, and her husband Claude Arnaud de Praneuf, one of the first moulinages Vivarais was built in this place around 1740.
In our time, the many craftsmen (bakers, shoemakers, tailors, taverns, grocers, millers …) who ensured the life of this village have disappeared as, more recently, the textile business; today several masonry contractors still provide some long-term jobs, four hydro-electric micro-hydropower stations are promoting ancestral water rights. St-Pierre-de-Colombier is part of the Monts d’Ardèche Natural Park.

Patrimony
The church dates from the nineteenth century. Its front door is remarkable. It was carved by a resident of the village, Mr. DELUBAC. He also made a Stations of the Cross, as well as Christ who is near the altar.
On a hill overlooking the village, there is a statue of the Virgin.
At the roadside on the left, after the bridge, the “faïsses” or terraces, are the vestiges of once abundant agricultural activity

Sports & Cultural Activities
The river Bourges is a beautiful river where you can fish for trout.
Several hiking trails will allow hikers to discover the many hamlets.
The boulodrome intercommunal is open to bowlers in winter.
A sports tray allows the practice of collective sports such as football, hand and basketball. 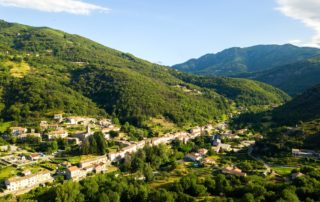 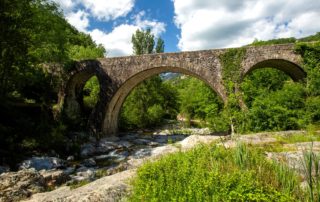 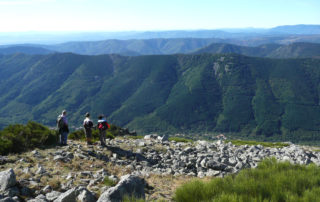 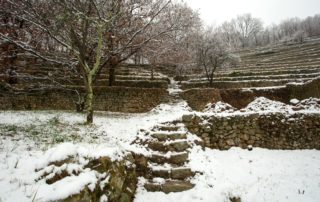 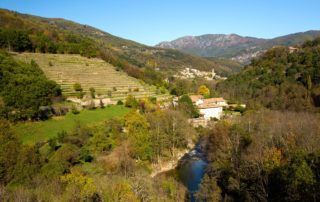