The Pont de Labeaume site, virtually where three valleys join, presents a major geological attraction in a small area: the morphology of the valleys is easy to understand by the superposition of basaltic flows.

From the left bank of the Ardèche, when looking towards the coulées the view is exhaustive on the village actually backed by the basaltic flow which dominates it. The great bend and its basaltic cliff at the base of which were made are the observations which have historically made it possible to give the first absolute carbon 14 dates, indicating that the last eruptive manifestations of the Ardèche could have taken place there. is only 10,000 to 15,000 years old.

Superposition of two lava flows (Ray-Pic and Souilhol flows) at the confluence of two valleys in the commune of Pont-de-Labeaume.

The site of Pont-de-Labeaume is at the “confluence” of two valleys (the Fontolière valley and the Ardèche valley) and marks the end of the route of two lava flows that formed basaltic prisms: the flows volcanoes of the Fialouse Cup (Ray-Pic) and Souilhol. The two flows issued at different times have filled pre-existing valleys, the first flow (Ray-Pic, Valley Fontolière) is covered by the second (Souilhol, valleys of Ardeche and Lignon). The rivers (Fontolière and Ardèche) have eroded the flows after their establishment: the latter are currently appearing above the river level.

In the Lignon valley the river has regrooved its bed until reaching the level of basaltic alluvium (deposited in the valley before the effusion of the flows) deposited in the valley before the flows. At the bridge of Rolandy, the Ardèche has overcreated his bed much further down, slashing the crystalline base. Today in Fontaulière and Ardèche alluvium is rich in crystalline rocks from the watershed, which form the bottom of the bed of the river.

A third casting has been issued since the Coupe de Jaujac after the other two. It has spread in the Lignon valley which converges with the Ardèche a few hundred meters before Pont-de-Labeaume. The latter stopped against the Souilhol flow and is not visible from this site. 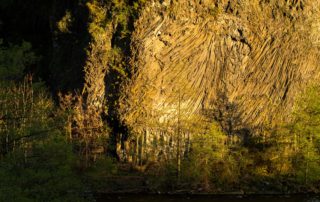