Basalt flows of the Amarnier

The Amarnier site allows to make relative dating and to study different eruptive phases of the Young Volcanoes of Ardèche. On this site, it is possible to observe the superposition of the lava flows of the Gravenne of Montpezat and the Ray-Pic.

This site is located sixteen kilometers from the starting point of the Ray-Pic flow, shortly after the location where the flow leaves the bed of the Bourges river to jump into the bed of La Fontaulière. Later, the basalt flow of the Gravenne goes down through the Fontaulière valley to partially cover the Ray-Pic flow.
Thus by going down the calade of the place known as Amarnier until the Fontaulière, it is possible to observe various products resulting from two strombolian volcanoes, the Gravenne of Montpezat and the Ray-Pic.

At the start of the trail, bullous rocks (very light due to their high concentration of carbon dioxide) and some slags refer to the explosive phase of the Gravenne. When descending, we first observe the prisms of the false colonnade (at the top of the casting) which have a characteristic alteration “in ball” (due to the infiltration of water in cracks). At the entablature (in the heart of the flow), false prisms follow the prisms of the true colonnade (at the base of the casting) of the Gravenne: the whole thus testifies to an effusive phase (setting up of a casting).

Continuing on the path, the descent makes it possible to reach a row of pebbles of different natures, corresponding to the intermediate zone between the two flows; it comes from a layer of alluvium (sediments deposited by a stream) deposited by the river after the Ray-Pic flow. Below the level of the water appears the false colonnade of the Ray-Pic, whose basalt is revealed rich in enclaves of peridotite with coarse grains, torn from the terrestrial mantle by the lavas rising to the surface. The large size of the enclaves and their frequency make it possible to attest that this is indeed the Ray-Pic casting. 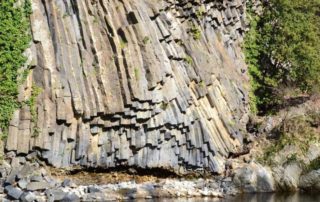 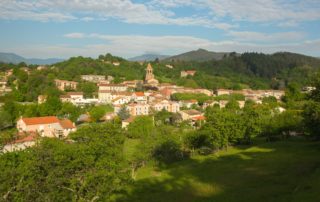 Basalt flows of the Amarnier