The volcanoes in the commune of Meyras are part of the Young Volcanoes of Ardèche. The Souilhol volcano and its two flows as well as the Maar Doris were thrown up during the last eruptive episode affecting the Bas Vivarais.

The Souilhol volcano, located on the ridge located in the confluence between Ardèche and Lignon, dominates the spa of Neyrac. It is a crater erupted having emitted two basaltic flows. The first poured out of the crater looking towards the Lignon and successively filled the valleys of Lignon and Ardeche (up to Pont de Labeaume). Another casting bypassed Neyrac Haut after escaping due to a fracture affecting the base.

Young Strombolian type Ardèche volcano, linked to the terminal phase of the eruptive series of volcanoes of Bas-Vivarais having experienced an explosive phase, then an effusive phase that was at the origin of two flows. It rises 680 meters above sea level on the ridge separating the valleys of Ardèche and Lignon.

The Souilhol is located in the same axis as the Maar Doris and the Gravennes of Thueyts and Montpezat.
The continuity of these volcanic devices indicates the presence of fractures in the base from which the magma has risen. However, the Souilhol is distinguished from other volcanoes by its very fluid lava at the very high temperature (up to 1200 ° C) often characteristic of Hawaiian volcanoes. This pulverized lava gave different types of volcanic bombs: ribbed bombs, as well as Pelé’s hair, fine filaments of rocks, so named in reference to the Hawaiian goddess of fire. Other projections have a surface called “bread crust”: the escape of the gas contained in the bomb while it is in the air, are at the origin of this particular aspect.

During its effusive activity, the Souilhol produced two flows: the first, directed south-east, poured into the Lignon valley before reaching the valley of the Ardèche to Pont-de-Labeaume, where it covers the flow of Ray-Pic. The second, which flowed to the northwest, split in two before encircling the hamlet of Neyrac-Haut by hitting the mountain.

After the cooling of the lava, the Ardèche has cut this casting by recreating its bed, highlighting the internal structure of the casting and in particular the basaltic organs of the true colonnade. The latter measures in places a dozen meters high. It is before the casting of the Jaujac cup, which ended its race against it at the confluence of the valleys of Ardèche and Lignon.

The “weeping basalt” present here (rock trapping carbon dioxide that condenses when vented) is a rock present on only seven volcanoes in France. Also note that the particularly fluid and hot lava of the volcano is at the origin of the twisted form of projections. In addition, the Souilhol would present the largest volcanic bomb of the territory on the periphery of its crater. 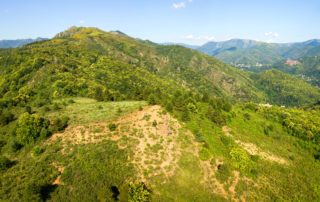 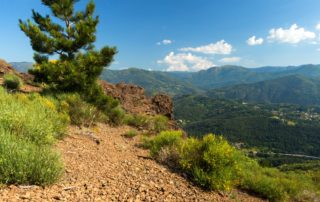 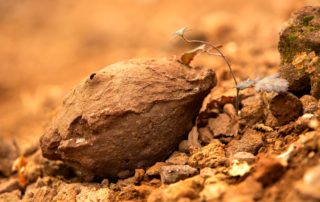