The name of the Bowl of Jaujac is due to its shape which apparently looks like a drinking bowl. “It is one of the most regular Volcanoes in France, even the most perfect” (Brousse & Berger, 1967, p.3).

“Arrived at Jaujac, we see on the left a beautiful mountain which offers an opening on its summit; it is a magnificent crater from which all the lava flows that formed this series of roads that reign throughout the Lignon River. … / … It shows a tear that lava produced by flowing from this vast crucible. … / … it is convenient to enter this crater only through an opening, the porous red and black lavas that have piled up, preventing us to be able to distinguish the stream of lava that ripples down from the mouth of the crater, down to the bottom of the plain where it can be seen, and it can be followed from distance to distance to the edge of Lignon, river which flows at the foot of Jaujac where are immense pavements of basalt, the highest of all the Vivarais. … / … “.
The cone is typically of the Strombolian type (even though the application of this terminology to small devices with a life expectancy probably not exceeding a few weeks to a few months, is at least abusive). The building consists mainly of projections and, to a much lesser degree, small levels of flows. Various authors think that, at least once during its construction, the crater was filled by a lava lake. Indeed traces of frozen lava have been described in the heart of the crater. The basaltic flow, vomited by the Cup of Jaujac, is characterized by its strong power. It reaches about fifty meters thick for a length that does not exceed 3.5 km. It was probably blocked by the Souilhol casting, previously issued.

This peculiarity leads to think that the pouring, emitted by the Jaujac Cup, is perhaps the expression of the last eruptive manifestation of the Pays des Jeunes Volcans of Ardèche. 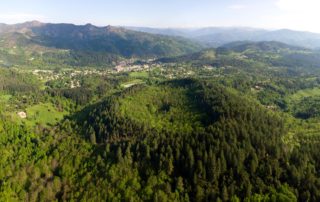 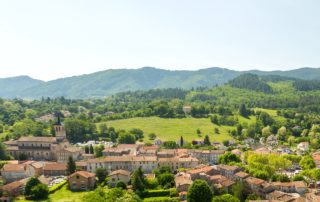 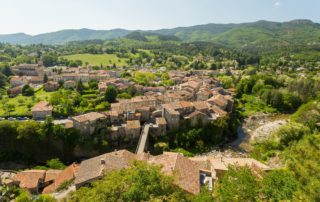